In the course of two and half years, the Dololearn project team worked together piloting and developing the Future School concept, which could be in the best scenario, scaled regionally and nationally. The key goal being developing the whole education system step-by-step by making small changes that have major impact in the long run.

“We share a vision of a generation that is well educated, has the freedom of choice and the skills and confidence to act thereon to sustain and improve their own livelihoods,”  The Dololearn project handbook.

The team hoped that a foundation for early stage entrepreneurial development is adopted; a culture of active and independent learning can inspire the children take control of their own skill development and career path.

Many Namibian schools do not have the resources to tackle big societal issues, but even small improvements could acts as a kick-start. Fixing the non-functional classrooms, supporting the teachers’ self-development and updating the digital learning tools, can affect greatly the schools’ future strategies, teachers’ satisfaction and students’ learning outcomes.

With active learning pedagogy, teaching becomes more learner-centred, effective and inclusive. The pilot schools’ classroom settings were changed to support teacher-student dialogue and more emphasis was put on how students learn, not just on what they learn. A group of Namibian teachers participated in an online course about Finnish education, which included a 2-week study and training visit in Finland.

Next, the teachers conducted teaching experiments in the schools, with the intent of improving the students’ engagement. Teacher Mari Coetzee from Berg-Op Academy found out that maintaining a vegetable garden was a successful method for inspiring the children who come from families with a farming background. Gardening also enhanced the class’ numeracy, language and social skills. 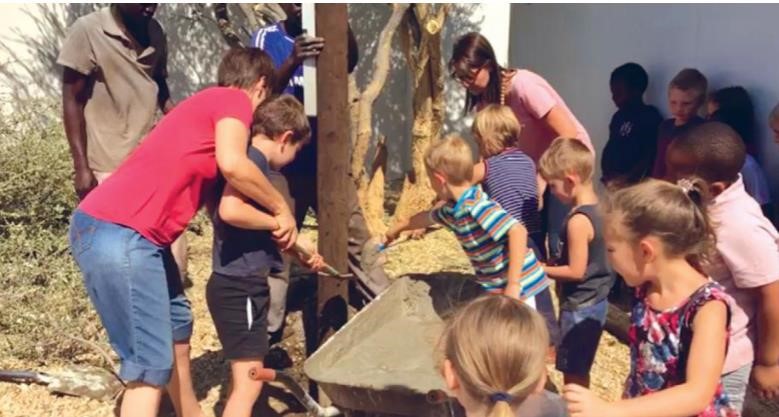 A total of six experiments were carried out in the schools. Polar Partners gave the appointed change agents extensive mentoring on how to implement new active methods and support the school community in the transition.

Digital learning was brought in to make the children excited about learning and advance their ICT-skills to the next level. Proper internet and computers were installed into the pilot schools, and our EdTech partners Eduten and MeHackit provided programs for the students to sample.

It was clear that children loved to learn math via Eduten Playground – some even attended extra classes just to study more! MeHackit on the other hand, made coding easy and fun for the students by mixing it with music composing.

The teachers felt most challenged by the quick changes. It was evident that before e-learning can be broadly adopted in Namibia, schools need better digitalisation strategies, which include competence levels or skills paths to support the teachers’ ICT-skills.

You can read more about this project phase from our related blog post.

Before the project, the pilot schools’ classrooms were impractical, crammed and didn’t support co-creation or open discussion. Many of the development ideas were devised by analysing user journey information.

“A school can be renewed by conducting small scale experiments by retrofitting existing facilities”, according to Suvi Nenonen from University Properties of Finland. There is no need to build a whole new school when bringing the learning environments to the 21st century.

“One can retrofit spaces with minimal costs and test new solutions in a short space of time. User involvement ensures new thinking and learning by doing”, Nenonen reveals.

In the end, the classrooms became more flexible; teacher could rearrange the furniture to support any learning activity. Extra storage and comfortable interaction spaces were added. In some cases, the classroom was reorganized so that 40 or even 50 learners could work effectively in the same space.

To get more information about the Dololearn-project, please watch the video:

We have also published Active Learning Handbook – Lessons Learned from a Finnish-Namibian Collaboration on Education, which explains in-depth all the changes made, lists the parties involved and evaluates the project’s ultimate social impact inside the two pilot schools.